We all know Rome wasn't built in a day, but what else do we know about this Eternal City?

Rome is one of the hottest destinations of 2016, attracting history buffs, food and wine enthusiasts, families and honeymooners alike. The eclectic city offers a little of something for everyone. On any given day, Rome is bustling with tourists tossing coins into fountains, searching for the best slice of pizza and taking selfies with the Coliseum.

The population of the city of Rome is around 3.7 million. It is the largest city in Italy by population followed by Milan and Naples. As of March 17, 2016 Rome was ranked the 102nd most populated city in the world, tied with Melbourne, Australia and Busan, South Korea.

dern Rome has 280 fountains and more than 900 churches. No wonder one of the most fascinating aspects of Rome is its immaculate architecture.

The Trevi fountain is by far the most popular fountain visited in Rome. It is also the largest Baroque fountain in the city.

DID YOU KNOW? Every night at the Trevi Fountain about 3,000 Euros are swept up from the bottom of the basin and donated to Caritas, a Catholic charity, who uses the money to provide services for needy families in Rome. 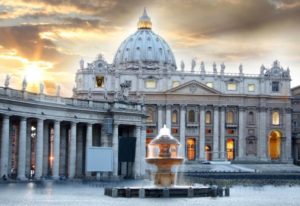 One of the most famous churches visited is St. Peter's Basilica, an Italian Renaissance church located in Vatican City.

Travel tip: When planning to visit churches in Rome, there is usually an unspoken dress code. Men will generally need to wear long trousers while women should wear below-the-knee skirts or dresses. Sleeveless shirts might also be forbidden, especially on women. Often times you will also be asked to remove headgear inside a church or holy building.

Special offer: Book our 7 Day Rome Experience City Stay including air from $1,099 by August 31, 2016 and receive $50 towards additional sightseeing!

3. All You Can Eat and Then Some

In Ancient Rome it was common for people to vomit between meals so they could eat more. With all of the delicious local cuisine options, this might not be so surprising. Rome is one of the foodie capitals of the world attracting many travelers with it's fresh pizza and pasta creations. 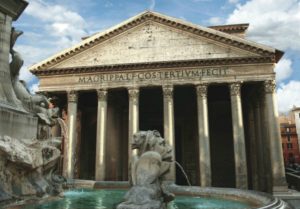 Concrete was a Roman invention used on many structures such as the Pantheon, the Colosseum and the Roman Forum, which are still standing today thanks to the development of Roman cement and concrete. The Romans first began building with concrete over 2,100 years ago and used it throughout the Mediterranean basin in everything from aqueducts and buildings to bridges and monuments.

Rome built the first-ever shopping mall between 107 and 110 AD! It was built by Emperor Trajan in Rome. The Trajan's Market, or Mercati di Traiano in Italian, were on multi levels and sold a wide range of goods and grocery items. Today, fresh markets and shopping malls are still busy hotspots in Rome for both locals and travelers alike - a great way to meet and learn from locals!